LIDO Version 1.1 introduces facilities for including statements from RDF namespaces. This reflects the growing importance of publishing and using LIDO records in a Linked Data environment. In contrast to GML, which is an XML namespace already introduced in LIDO v1.0, the newly introduced RDF namespaces are not restricted by the XML schema but declared using the xs:any data type. Proper usage of the RDF statements described below thus requires an additional validation step for which Schematron rules are supplied.

skos:Concept
The Simple Knowledge Organization System (SKOS) is a W3C recommendation for the expression of vocabulary. It has evolved to the de-facto standard for authority data in the Linked Data sphere. Many important controlled vocabularies are published in SKOS, for instance, the Art & Architecture Thesaurus (AAT) or the Library of Congress Subject Headings (LCSH).
We introduced skos:Concept from the SKOS namespace to enable a seamless and lossless representation of authority data within a LIDO record. SKOS properties foster interoperability in that descriptors are identified by URIs and equivalencies to concepts from other vocabularies can be stated explicitly.
skos:Concept is introduced for all LIDO elements that are derived from two abstract types, Concept Complex Type and Concept Mixed Complex Type. SKOS statements are not restricted to a particular namespace initially. Proper usage of the SKOS namespace must therefore be checked using the given Schematron rules or equivalent tools.

owl:sameAs
The sameAs property from the Web Ontology Language namespace is used to express that two named entity identifiers refer to the same individual in the real world. It is widely used in authority data to avoid duplicates when used in combination with other sources. Wikidata “Identifier” statements are a rich source of identity data that can be expressed as owl:sameAs. This property has been introduced for all LIDO elements based on XML complex types for individual entities. Declared as xs:any, the OWL namespace is not enforced by the schema definition itself but must be checked using the given Schematron rules or equivalent tools. 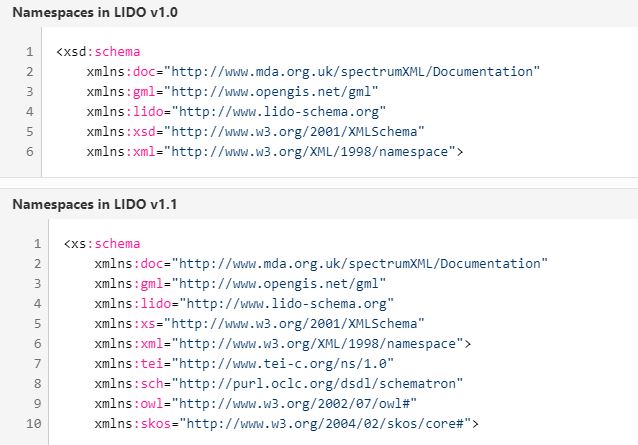