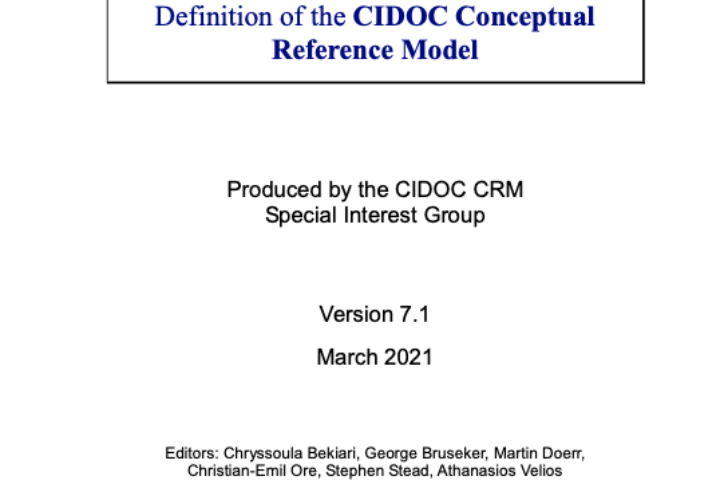 It is our pleasure to announce that the CRM-SIG has produced, with many contributions, help and support, the new official version of the CIDOC CRM base: CIDOC CRM 7.1, available at: http://www.cidoc-crm.org/Version/version-7.1 .

The last official version, 5.0.4, dating back to 2011, formed the basis for the update of ISO21127 to ISO21127:2014. Since then, CRM-SIG have worked diligently to improve the expressive power and quality of the CIDOC CRM as a base model and have widened the scope by encouraging and approving compatible extensions.

For CIDOC CRM 7.1, the entire introductory text has been revised and partially rewritten in order to serve as a precise definition of the intended function and theoretical foundations of the model and as a minimal didactic introduction. The model itself has been substantially enhanced in multiple directions.

First, it has been redesigned to provide a) an effective model for relating things and phenomena to space and time that supports interoperability with geo-referencing standards and GIS applications. In order to support this new functionality, a few more classes and nearly 50 more properties have been added to the standard.

Third, the model has been streamlined by deprecating a few constructs that can be replaced easily by other parts of the model or which offered little practical value. These efforts were carried out in order to simplify implementation and improve model comprehensibility. While this creates some minor backwards incompatibility, the SIG preferred this over indefinitely carrying forward backlog of some initial decisions that were based on a different anticipation of the model’s future applications.

Finally, extensive and valuable editorial work by members of the SIG to apply consistent style rules and templates and to remove typos and difficult to understand phrases in the text. An emphasis in this work was to improve the quality of examples provided. Explanations and literature references were added to the real world examples for classes and properties so that readers can have full access to their context. Where examples had been missing, they have been added wherever possible. While over a year of effort has gone into this task, further corrections may arise as the document is examined by the community. The improvement of the document is an on-going process.

CIDOC CMR version 7.1 will be the basis for submission to ISO as a new community draft.

The version will be presented in more detail in the next virtual SIG Meeting March 8, 2021.